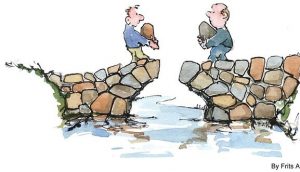 Having an assertive communication style is generally good but many leaders and followers have a more passive style, possibly because they confuse assertiveness with aggression. And they are two different things as the following examples may illustrate. But because they want to avoid aggression, they become passive.

In groups, for example,  someone with an assertive style would participate whilst an aggressor would want control. The passive would want isolation from the group.

In considering the views of others, an assertive, whilst speaking to the point, would consider alternatives whilst the aggressor may only consider his/her own feelings. The passive, meanwhile would agree with others, irrespective of their feelings.

Think you get the point.

When communicating, the behaviours of the assertive person manifest themselves in different but more positive ways than those exhibiting aggressive styles. Avoiding assertiveness because of a mistaken notion that it comes across as aggressive can lead to a nondescript type of behaviour. Many people are concerned that if they assert themselves others will think of their behaviour as aggressive. But there is a difference between being assertive and aggressive.

I believe that Assertiveness is a key communication skill. It allows you to pursue your own objectives and stand up for your beliefs and rights whilst respecting the rights, values and beliefs of others. Assertive behaviour is the ultimate win-win behaviour. You can’t always get what you want from every situation but adopting assertive behaviour allows you to seek the best possible result for both parties. Even when you cannot reach a suitable compromise, assertive behaviour will help you to maintain a positive and friendly relationship.

If you think that a shift from passive behaviour to a more assertive style is required  it will help you to have an understanding of what assertive behaviour looks like.

Here are a few tips to get you thinking. Using these will I am sure improve your relationships

In order to explain your point of view, you may need to express an opinion or explain your interpretation of events. Use phrases like ‘”In my opinion ….’. Otherwise it may appear that you don’t have any respect for the other person’s views

If you are offering your view, it is vital that you allow the other person to express theirs. Do not just assume that they will, actively seek their view, e.g.

‘What are your thoughts?’

Asking for feedback and opinions demonstrates that you respect their opinion and you want to reach a common understanding.

Use descriptions not judgements

Avoid assumptions, judgements and opinions where possible. To do this, accurately describe what happened. When you do this, both parties have a point of agreement to start from. Here’s an example:

If you feel angry, upset etc., it is important to remember that the other person did not choose for you to feel that way.  If you blame others for your feelings, it comes across as an attack and they go on the defensive. This closes down the channels of communication. Rather than blame, take ownership of your feelings

And, if you think your behaviour is too aggressive at times, try these tips

Give others a chance to speak.

Focus on “I” not “You” language (for example, “I would like a chance to say something” instead of “You’re always interrupting”)

It can take time and practice to become assertive but it will be well worth the effort.